Hear from our franchisees 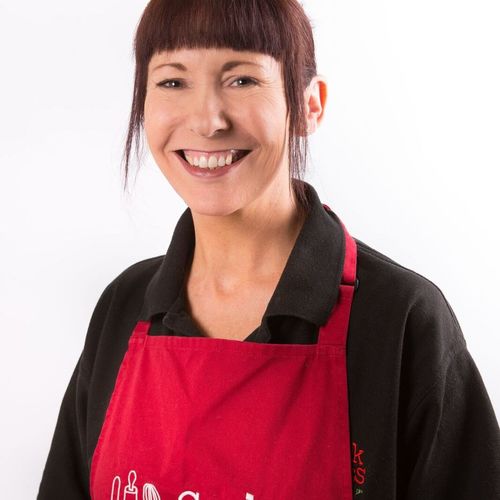 "Signing up to Cook Stars is honestly and truly the best thing I ever did!"

>Why did you want to become a Cook Stars franchisee?
I had been searching for a while for something that would allow me to be my own boss, would be flexible enough to fit in around my family and would utilise my existing skills. Cook Stars ticked all the boxes and then some! Plus, when I met Cathy at the Discovery Day she was just so relaxed, friendly and dare I say it 'normal' And her enthusiasm for the company was just completely infectious.

>What did you do before Cook Stars?
I worked a training consultant for a software company; delivering training and designing training programmes and materials. Prior to that I worked in the Hotel industry for 12 years as a Front of House Manager.

>When did you start running classes?
I started my classes just after Easter this year (2017), just part time initially alongside my existing job.

>Have you run any other sessions other than your weekly children's classes?
In addition to the weekly classes I ran some Workshops over the Summer Holidays and have recently taken part in a community Fun Palace event hosted by a local town council and Bedfordshire Libraries. I have also been asked to run a Halloween themed session at a local soft play centre. In terms of parties I, haven't really promoted this side of the business so far, but the enquiries still trickle in as more and more people get to hear about you and I already have a few booked in over the next few months.

>What do you enjoy most about running your franchise?
Oh my gosh, where do I start! The look on the children's faces, the flexibility, the freedom, the buzz every time you get a new order or receive a positive comment, the hilarious comments the children make, the lovely parents I've met, the feeling that I'm in control of my own future..... the list is endless

>What were the greatest challenges setting up your franchise?
I think for me the greatest challenge was the lack of time I could devote to it as I was still working in my old job for the first 5 months. That said though I wouldn't have had it any other way as it meant I didn't have that added pressure of needing to earn a wage out of it and could put everything I did earn back into the company.

>What is your greatest achievement and what are you most proud of?
Wow! It's tough to say what my greatest achievement is really. I think just being brave enough, assertive enough, motivated enough & confident enough in the first place to even sign up in the first place was an amazing achievement for me. I've always dreamed of doing something like this but never quite had the nerve to take that first step. Cook Stars is just SO easy though and because it isn't a massive financial investment either I think that really helped me decide to take the plunge. As for what I'm most proud of that has to be my husband and children for all their support and for putting up with me talking about nothing else for the past 9 months, and of course all the children in my classes.

>What are your future plans for your franchise?
I have big plans for the future, but I'm looking at growing the business slowly, as it takes a while for each class to establish itself and I want to know I've got it right at each venue before I move onto building up the next one. So the next step is to add another couple of classes to my existing schedule and work on increasing the Party side of the business. I am actively looking to get a casual helper for parties, who can eventually move on to running classes of their own, and in time I hope to recruit additional class leaders so we are in a position to run more than one class/party on the same day.

>Any other comments about life as a Cook Stars franchisee?
Signing up to Cook Stars is honestly and truly the best thing I ever did! I won't pretend it's easy, because it is hard work, and there are no set hours to your working day, but after every session I spend the rest of the day wondering around with a demented smile on my face! It really is the best job ever and I count myself very, very fortunate to be doing what I do.