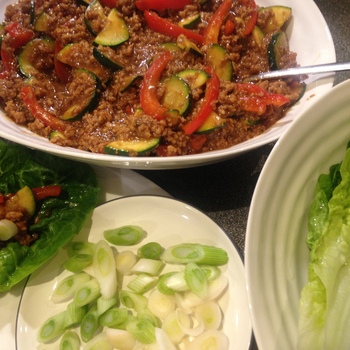 I had a chat with someone today about what I cooked on the weekend for the 'blog meal' as its becoming known! They thought what I cooked was well and truly weird! Not the meal itself so much (although I know a look of disgust when I see it) but more that I fed it to the kids (GASP). Now, I'm afraid I'm not very good at keeping my opinions to myself, so will someone please help me up onto my soap box to get a few things off my chest?

As a family, we generally all eat the same meals. There are some nights that the kids eat something different, like if Mr H and I want to eat something really super spicy (not a normal curry - they eat that, I mean HOT!) but on the whole we eat the same.

I get a bit no-nonsense 1930's matriarch when it comes to mealtimes. I refuse (quite vehemently) to cook separate meals. It's not just a time thing, although really how do people find time and patience to indulge everyone's preference at meal times? For me, it's more the principal. I believe (quite strongly actually) in letting kids have opportunity to try new things. You don't need tonnes of money or time or stupendous cookery skills, you just need to believe in it.

I feel a bit sad when kids are given cr*p to eat like turkey dinosuars for tea because that's what kids 'should' like. I'm sorry turkey dinosaurs but I think you are soooo wrong and should be extinct. I know, I know - these are not even my children so I really shouldn't be getting my knickers in a twist but it really irritates me....disproportionately so admittedly.

I know flipping good parents who bend over backwards to make sure they're children are exposed to all sorts of weird and wonderful experiences in life ....fabulous, loving, giving parents who try their very best to give their children everything they can.... but when it comes to food they change completely. They restrict and control what they feed their kids because of their beliefs and their ideas around what kids should and shouldn't eat. Where is the logic?! Why should food be a treated so differently to their otherwise very praise worthy ethos?! An impressionable child will of course believe someone they look up to who says "you won't like that" or will learn that they are eating food that is 'appropriate' for a child whilst their parents eat the food 'suitable' for grown-ups . Or maybe the parents too are eating turkey dinosaurs and the problem lays a little deeper?!

My kids are all very different when it comes to food - and that is fine. They are all treated the same when it comes to mealtimes though -whether they like it or not. My logic is that this gives them all chance to decide for themselves what they like and don't like. If they don't like what is put in front of them then that's fine. But the rule is they have to at least try it. They know nothing tips mummy over the edge more than saying "I don't like it" without trying it! The kids who come to my cooking classes have learnt the same....I always ask them to try everything, and guess what - they've all found LOADS of things they like that they didn't think they would! Ta - da!

Our eldest really understands food and flavours and takes his food quite seriously. He loves squid, mussels, sprouts, sardines and a massive array of foods. Don't get me wrong, he is not completely weird , he is also very partial to KFC and a dab hand at making a pot noodle! Then we have our middle one who loves bland food - food to her is functional. She likes food that is plain, food that is beige, or food that is beef. Her faves are pasta, noodles, porridge, custard, double cream, mashed potato, beef, beef pie, steak pie, beef stew, steak, steak slice. It has to be bulky, it has to be filling and it has to be lots..... and often. She is stick thin. It is not fair. Our littlest loves a good old fashioned sandwich but he is a bit of a sandwich tart. Cheese used to be favourite but now it must be ham. Occasionally he indulges in a spot of tuna, sweetcorn mayo when he is feeling bold but in his heart, ham is the best. He is also happy with a chunk of cucumber or red pepper , all sushi and anything deep fried which goes with tomato 'ketchop'.

Now you may have the impression from my evangelical rant with me up on my high horse that I have wonderful children who are grateful for all food put in front of them at meal times and willingly try everything without question. Errr...no. Probably at least once a week (if not more) they don't like what I give them (especially the littlest who is THE most stubborn 5 year old I have ever known). We have all the usual "you're not getting down until had some more peas" rows etc. As long as the kids try the food and then (and only then) decide they don't like it, I respect that and of course they are not forced to eat the rest. Yes it's irritating when they don't like something (and yes I do shout sometimes!) but really, it's not the end of the world. It does not deter me from trying something new next time and I certainly do not appease the stubborn 5 year old by giving him a ham sandwich!

I will NOT cook them something else to eat. I know that they will eat enough because I don't feed them anything hideous like testicle and cabbage soup, they are given lovely meals. My kids really do know they will not be given an alternative if they fuss but I don't worry they will starve. There are always plenty of options on the plate so always something to eat and plus they have a snack (usually cereal) before bed. So my plan doesn't always work but I keep going because, for every meal they don't like, there are many many more they do like so I think giving them choice is working well.

I know many parents may not agree with this and will see my way as wrong (or maybe even cruel judging by the face of person who has set me off on this rant?!). Perhaps they believe to avoid a plate that is not completely clean, that I should give them 'children's food'. Well, I think you know my opinion now....

It is not an easy subject this -there are many different issues at play (practical, psychological, social) and opinion will vary widely. I could go on for hours (and I will pick this one up another time because it fascinates me) but frankly, I'm now ready to settle for the night with a big glass of wine.....

So, to get onto what I cooked that caused all this rant (at last....) In the classes I run last week we made turkey meatballs stuffed with mozzarella (yes - as gorgeous as they sound). Cut a long story short (windy Friday night, fallen tree, blocked road on way to class, some people couldn't make class)....I ended up with 2 packets of minced turkey left over. The kids wanted Chinese so I made 'Kung Pao Turkey wraps'. They were easy, quick and REALLY tasty. My photos don't do it justice, in fact I'm discovering food photography is actually really hard!

The kids all loved them and loved the idea of making parcels. None even commented their parcels were lettuce....they just enjoyed making parcels and not having to use cutlery! Lily didn't like the courgette and peppers but wolfed down the lettuce. She would normally say she doesn't like lettuce so this was a plus...Rome wasn't built in a day! I did some noodles on the side (but egg fried rice would be amazing with it). I really recommend trying these, they really are yummy and so quick to make.

Let me know how you manage meal time. Like the topic of sleep (or lack of) and children, children at meal times is such an emotive subject. There are so many sides and complications to it and I'd love to know your thoughts. Are you team Turkey Dinosuars or team Kung Pao Turkey Wraps?!

Mix together half the soy sauce, half the cornflour, plus the chilli sauce, mirin and 1 tsp of the sesame oil with 1 tbsp water in a small bowl. I used a ramekin.
Heat the rest of the sesame oil in a wok and add the turkey, and the rest of the soy sauce and cornflour. Stir fry for 5 minutes.
Add the garlic, ginger, courgette, and pepper and continue to stir fry for a further 5 minutes, until the turkey is cooked through.
Add the soy sauce mixture you made earlier and stir until the turkey is coated. You can add a couple of tablespoons of water if it looks too dry.
Put the lettuce leaves individually onto a plate, and spoon a bit of the turkey mixture into each.
Top with the spring onions and serve.